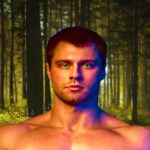 I am Bodee Flint, a cyborg created to fight an interstellar war, only I was never awakened until it was all over. Instead I was awakened by the cyborg team who returned from the war to help restore civilization to Earth.

Since I was awakened, they reprogrammed me to clear damaged buildings of squatters and demolish them so we can build a new starport.

Real life is so much richer than the virtual life I had in stasis. We rescued many females from the demolition site, but none were for me. About six months in to the project, I returned to the barracks after a long day, and my female… My one female was waiting with Commander Somber and his female.

The commander and his mate brought her to meet all of us because she wanted a mate to breed and make offspring. I think I have loved her all my life but she was never quite real in my circuits. That was the day I became Talia’s Cyborg.