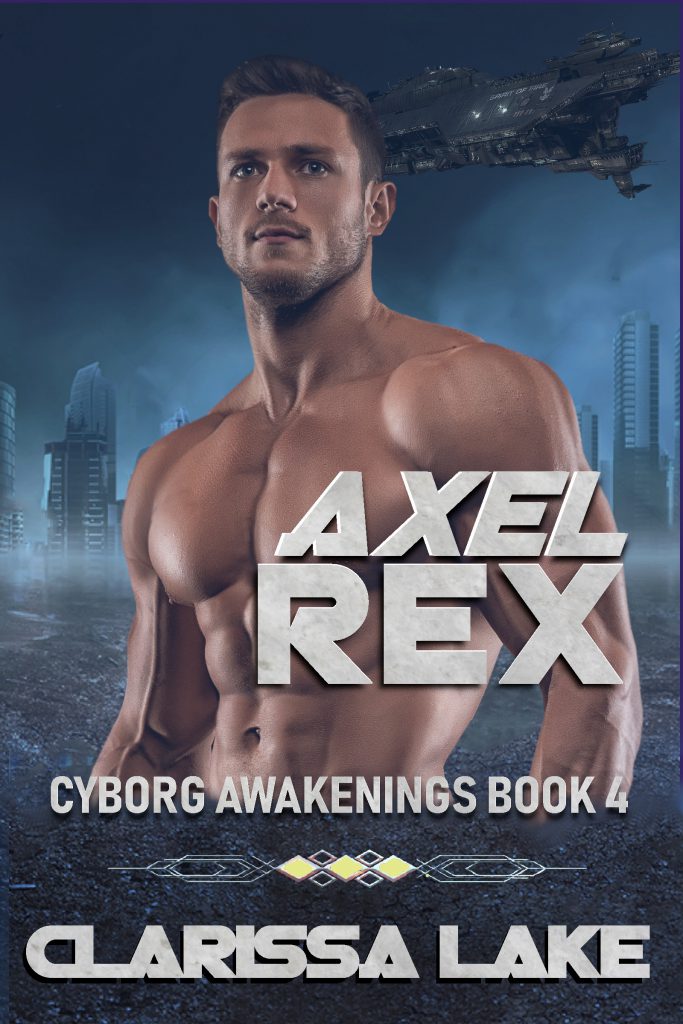 “Let me go you fucking robot! I live here… I didn’t do anything! Let me go!” the female screamed as Axel Rex escorted her from what was once a luxury apartment building in a city called Farringay.

“I am not a robot,” he corrected. “I am a cyborg in full battle armor.”

“I don’t care who you fucking are. You have no right,” she hissed. “I don’t wanna go anywhere. Let go of my arm.”

“I apologize if I have caused you pain. If you are in that building when we demolish it, you will die.” Axel didn’t stop until he had her outside the building.

“No, you can’t Sammy’s in there. You have to let me get him. Please don’t kill my cat. He’s my best friend,” she pleaded.

Axel receded the helmet of his armor and looked down at the disheveled and dirty female in his grasp. Her amber flecked green eyes shimmered with the hint of tears as she said the last, and something stirred in him as her scent reached his nostrils. Even under the smell of her unwashed body, a more subtle scent that put his body on alert.

The foul-mouthed female in his grasp was his female. He blinked and wondered if fate was playing a joke on him. My female? This is my female!

For a moment, the utter joy of the discovery stunned him. He sniffed to catch the scent again to be sure he wasn’t mistaken. He wasn’t.

“Please, you can’t kill my cat,” she cried, trying to wrench her arm from his grasp.

“Your cat?” he said, frowning as he stared down at her, thinking she might be attractive under that stringy dark hair and layers of dirt.

Axel looked back at the tattered building he was about to destroy and scanned it with his internal sensors. There was a small feline hiding in some rubble at ground level. From previous observations, he knew that people living in the ruins valued their animal companions.

“I have orders to destroy all the buildings in this area. I will let you go back to get your cat if you agree to come back out,” Axel told her. “Do you also have belongings you wish to recover?”

She shook her head, staring up at him. “Nothing worth saving except Sammy. But where are we going to live if you destroy my building?”

“Go get your cat, and we will talk about it.” He released her, and she nodded. He watched her pick her way through the rubble as another shock of excitement raced through his mind and body. Mine, he thought.

Her body was lean and graceful, a bit too lean, but not surprising considering how people lived in the ruins of Farringay. Her hips swayed just a bit, clad in a ragged pair of shorts that barely covered her ass. Her muscular legs were shapely and her back straight. Her stringy brownish hair that hung to her shoulders.

Axel’s mind was racing as joy continued erupting inside him. He didn’t even know her name yet, and he was wondering how to break it to her that she was his. At least she wasn’t gravely injured and defiled as Jolt Somber’s mate had been. But he didn’t think this claiming would be so easy as Bodee Flint’s had been either. His mate had come looking for him.

He used his cybernetic internal scanner to follow her progress, waiting patiently for her to emerge with the cat she claimed. She picked up the cat from its hiding place, only instead of coming back to where Axel waited for her, she exited through a window at the back of the building.

“Spark,” Axel called over the internal cyborg network. “The female is running. I’m going after her. The building is clear. Take it down.”

“Yes, sir,” his lieutenant responded. If his second in command wondered why he was going after the female, he didn’t ask. Axel would tell him if he wanted Spark to know. But it was unusual. People frequently ran when the cyborgs commanded them to leave the ruins of buildings, they called home. Axel had never gone after any of them. Then it dawned on Spark that the female must be his.

Axel ran in a parallel direction from the female, calculating where he could intersect with her route. He cut through an alley just ahead of her, stepping out in time to catch her before she ran smack into him.

She squealed as his hands gripped her upper arms. “Let me go,” she screamed. “Let me go.” Her eyes sparkled with anger as she stared up at him, clutching a big yellow tiger cat to her chest.

“I can’t. I won’t hurt you,” Axel asserted, staring down at her. “But someone else might. I can protect you.”

“I’ve done fine by myself until now,” she muttered. “I run fast and hide well. I don’t need your help.”

“Yes, you do. Where are you going to live? What are you going to eat? You are only one female. You have no weapons. If the gangers catch you, they just might kill you after they all rape you.”

“It hasn’t happened yet.”

“But it has happened to other females here. I can take you to a safe place where you can get food and shelter.”

“Clearly you don’t sense it the way I do, or you wouldn’t ask.” Axel hesitated. If he just blurted it out, she probably wouldn’t believe him. “Just come back to the barracks with me, and I will explain it to you while you have something to eat. Then, you can get cleaned up.”

“I hope I can convince you that you do.” He gave her a faint grin and loosened his hold on her arms. “Will you tell me your name?”

She caught her breath as she looked up into his steel-grey eyes. The faint smile he gave her softened his features and stirred things inside her that she didn’t know she could feel. …Things she didn’t want to feel for the big cyborg. A man like him could kill in the blink of an eye with no weapons. Would he do that to her if she didn’t do what he asked?

“L-Layne Rose,” she stammered. The way he was looking at her made her realize that killing her was not what he had in mind. He wanted her, and he wasn’t going to let her go. That excited her almost as much as it frightened her. “Can bring Sammy?”

Just then, an explosion sounded from one of the buildings being demolished. Layne’s cat startled and dug his claws into her arm, trying to get away. “Sammy, no. Shh, it won’t hurt you.”

“We should go,” Axel said. “There will be more explosions. We have to clear four square kilometers from this area for the new starport and employee residences.”

“Where are all those people going to go?”

“There is an Enclave near New Chicago. We have been transporting people to join one of their communities out there,” Axel explained. “This way.” Axel pointed and rested a gloved hand low on her back to urge her to walk with him.

While they were walking, he summoned the pilot for the hover transport to take them back to the industrial complex that served as their base for the starport project. It was the closest building intact near Farringay that was large enough to hold the 500 cyborgs who were doing the demolition work and securing the perimeter of the project area. Axel was more than capable of flying the transport, but his crews would need it to return to base at sunset.

He didn’t want to leave Layne on her own until he settled some things with her. As they boarded the vehicle, Axel considered that it might all go better after she had a meal, a shower, and fresh clothes.

Ten minutes later, they were landing at the cyborg base. The old industrial complex consisted of four enormous connected buildings set in a rectangle with a once-grand court in the center. The courtyard was overgrown with weeds and tall grass.

The cyborgs made little effort to improve the place. It only needed to serve them for several months while demolished the ruins and built the starport, with housing for the employees, and support businesses for the community. It would be a gated community with security.

“It’s not much to look at,” Axel said as they went inside. “But it’s safe here. Do you want some food before you get cleaned up?”

“Yes, I would. I haven’t eaten since yesterday, and all Sammy had was a small mouse he caught,” she said to him.”

They walked through a wide corridor with large rooms on both sides that were filled with rows of bunks stacked two high. The mess area was located in the open area past the bunk rooms. Food processors were set near the wall to the right with six rows of long tables set back from the bank of food dispensers.

Axel led Layne to the food line. “Can you read, Layne?”

“Only a little. My mom started to teach me, but she was gone before I learned more than basic words.”

“I don’t know. Mom disappeared one day and never came back,” Layne said with a sigh. “I’m sure something happened that she couldn’t come back or she would have. She could be dead.”

“I am sorry for your loss,” Axel said sincerely. “What would you like to eat?”

“I mostly eat meat, whatever I can catch or kill, mostly small animals: squirrels, rats, rabbits. I find greens and fruit sometimes in the growing season.”

“Here we have cultured meat and eggs, vegetables, and fruit, pasta and various mixtures of everything. We also have coffee, tea, and various fruit drinks.”

Layne looked up at him and shrugged. “Pick something that you think is good. And some meat for Sammy.” She set the cat on the floor now that they were away from the blast zones in the city. The cat generally followed her wherever she went.